by Chris Perugini May 15, 2018
0
FacebookTwitterPinterestEmail

When you hear the name Van Winkle, you probably think of two words first: Pappy and bourbon. However, the Van Winkle family also puts out a rye fairly regularly called Van Winkle Reserve Family Rye. It’s sourced from a few different distilleries and for many years now, this 13 year straight rye whisky has been tanked to prevent any further aging. It’s usually released every year or two though there’s never any set schedule. Word on the street is that the tank is getting close to being empty. In the mean time, Buffalo Trace has been working to bring stocks up to age to replace the old sourced material.

Like any product with Van Winkle in the name, you’ll probably never see it on a shelf and if you do, it will likely be accompanied by an exorbitant price tag. Such is the whisky world these days.

This quick review is of the 2016 release. Always bottled at 13 years old and 95.6 proof, let’s see how this rye stacks up against the competition. 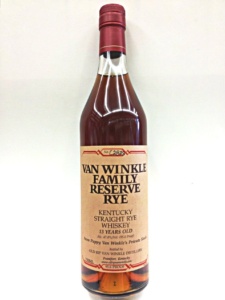 Chris Perugini was exposed to whisk(e)y in 2008 and has been feverishly learning about it ever since. He has watched the landscape of both the industry and the market evolve over the years and is fascinated by both the rapid growth of whisk(e)y as well as how the market has responded and adapted over time. He loves talking whisk(e)y so please reach out anytime!