by Chris Perugini May 21, 2020
0FacebookTwitterPinterestEmail

Japan is a tough region for me to appreciate in the current whisky climate. It’s severely overpriced next to comparable whisky from other regions and many brands fall under the category of “fake” Japanese whisky. If you haven’t seen this handy guide by Richard at Nomunication, please check it out. I use it quite often and it’s incredibly handy.

What is “fake” Japanese whisky? In simple terms, the regulations in Japan allow a bottle to labeled as “Japanese whisky” as long as it’s bottled in Japan. There’s no requirement that it needs to be distilled or even aged in Japan. That means a producer can buy second-rate casks from Scotland or another country, bring it to Japan, and slap a label on it that says “Japanese whisky.” How does that sound to you as an end consumer?

There’s also the matter of shochu and other spirits being labeled as Japanese whisky. Shochu is a distilled spirit usually made from rice but can also be made from barley, buckwheat, sweet potatoes, or various other ingredients. Several Japanese distilleries have been releasing Shochu labeled as whisky and today’s review is of one of them.

Kumesen Distillery’s Meiyo 17 Year is marketed as a Single Grain Whisky exclusively for the US market (where Japanese whisky just happens to be all the rage right now). My understanding is that Meiyo is primarily if not all rice-based but I have no confirmation on that. A typical single grain whisky would come from a single distillery and be made from grains less than 100% malted barley. You might expect a single grain to be distilled from some combination of barley, rye, corn, or wheat. By comparison, one of the two styles of Shochu out there can contain dozens of ingredients in the production process including milk, onion, and cactus. In short: Shochu is not the grain-based spirit you’re expecting as a whisky drinker.

Yet that didn’t stop from cases of Meiyo 17 Year from ending up in the whisky section of Costcos and other liquor stores around the US with a price tag at or north of $250!

Today’s review is going to be as objective as possible considering what I’m drinking. The score will not take into account the fact that this is not true Japanese whisky nor the price tag. I hope that this post brings some awareness to the blatant lack of standards in governing Japanese whisky. Always make sure it’s the real deal before you spend hundreds of dollars on a brand you aren’t familiar with! 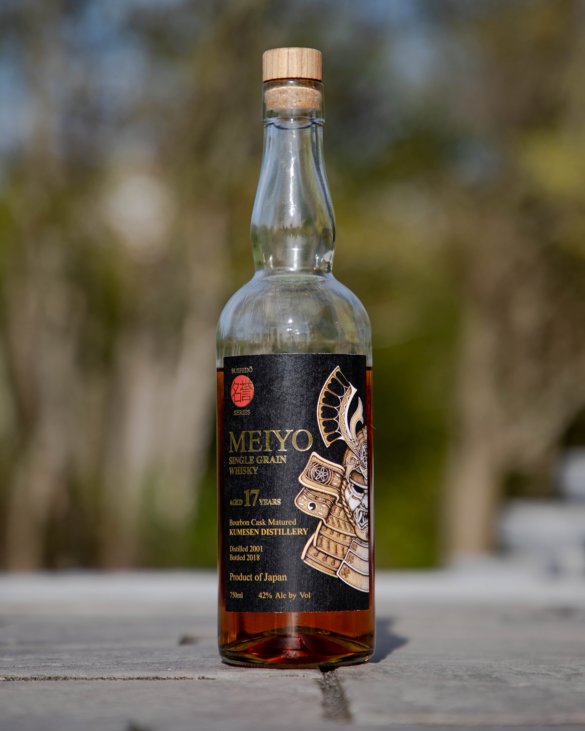