Today, I’d like to talk about The Macallan. The home of the Easter Elchies House has quite the reputation in the whisky world. For decades, Macallan was known as an absolute juggernaut in the scotch whisky world putting out consistent high quality releases. The cost sometimes reflected a premium pricing strategy but the whisky was excellent so people didn’t seem to mind. Fast forward to 2017 and that reputation has shifted drastically. The distillery has all but completed a brand shift that has positioned The Macallan as THE premium whisky brand. Pricing reflects this and the market has responded exactly as the distillery hoped, especially in Asian markets. Globally, Macallan releases fetch absurd amounts of money in private secondary market transactions and many official releases have completely out-priced normal whisky consumers.

Here’s the thing about Macallan releases from any time during the last decade: the whisky is almost unrecognizable compared to the bottles that established the Macallan name. Why would the company do such a thing? There are a few reasons for this. First, the whisky market is in a boom unlike anything we’ve ever seen before and the entire industry is on an unabashed cash grab. Who knows when this market will collapse and if people keep buying despite some bottle prices doubling every few years, distilleries can seemlingly charge whatever they want. This market boom has also created multiple supply issues. Aged stocks are rapidly dwindling to keep up with current demand and further up the supply chain, the increased demand has also caused a shortage of quality sherry casks which have been the lifeblood of the distillery for most of its history.

In short, quality casks are hard to come by and probably cost a lot more, aged stocks are depleted, and people are paying for any bottle that comes out. What’s a distillery to do? Macallan has not only been easing back on the amount of sherry casks they’re using but when they do use sherry, the proportion of first fill is much lower these days. Couple that with a brand new stillhouse and that’s going to make for a very different product. Do I blame Macallan? Sorta. I can understand why they’re doing it and it’s clearly making them a lot of money. I more blame Edrington Group where I assume most of the pressure to squeeze out every last dollar (or pound) is coming from.

Is Macallan now a “bad distillery”? Not necessarily. I at least like the concept of the Editions Series though they are hit or miss for me and they have put out a new cask strength offering in “Classic Cut”. It’s not even remotely close to the old Cask Strength bottle but I hear it’s a solid offering in its own right.

And that leads me to today’s review of Macallan Cask Strength. The discontinuation of this release was the symbolic death of The Macallan of old for me. Macallan Cask Strength was the embodiment of everything Macallan used to do right: thick, rich, spicy Macallan goodness with no heat despite being around 60% ABV for $60. What an absolute gem this was. In some parts of the world, it carried a 10 year age statement. In the US, it was NAS and likely had some 7 or 8 year old whisky in it. As this expression shows, age doesn’t matter as long as it’s quality spirit. 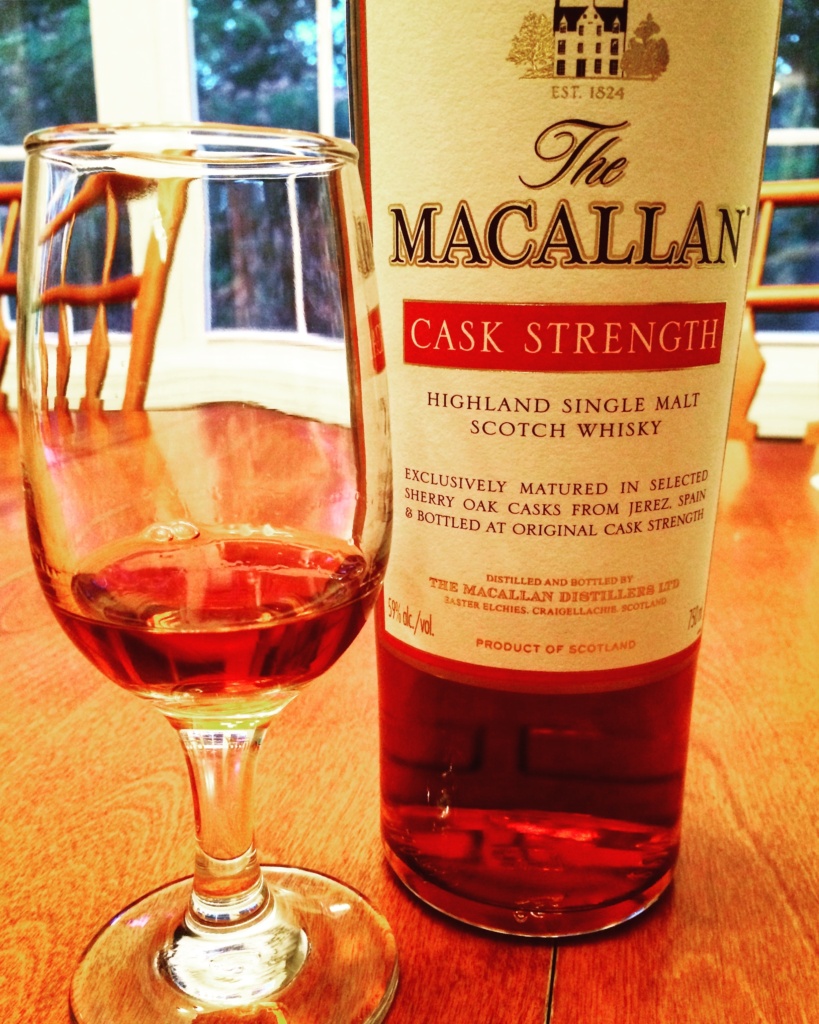