As you have probably read by now, I got an opportunity recently to taste The Balvenie’s Cask 191 with David Stewart, the Balvenie team, and some fellow social media personalities. The bottle was supplied by Instagram’s @thescotchfather and the tasting event at Jack Rose Dining Saloon in Washington DC was organized by the Balvenie. Thanks again for making this happen!

To read about the rest of the experience that evening, please check out my full tasting event recap. This review is just about Cask 191.

Cask 191 was a big deal when it was initially released. I mean a REALLY big deal. The press release for this bottle conveyed a tone of rarity and innovation on the part of The Balvenie and for good reason. Cask 191 is the smallest ever release at 83 bottles. I did some quick math before getting the official numbers and my angel’s share estimate of 75% evaporation was still too low. The actual number was 77%, the equivalent of 173 bottles. This whisky was also the very first Balvenie release to be solely matured in a sherry cask. David Stewart said at the tasting event that they couldn’t be 100% sure of that fact but the press release info gives an indication that they were probably 95% sure. My tasting notes scream “sherry” as well so I’m willing to put that uncertainty to rest. The natural cask strength of 45.1% after 50 years is pretty impressive given that the in-cask strength was 63.5%. It’s a wonder it stayed above 40% at all!

The suggested retail price of this bottle at release time is the other number that really blew me away. It was selling for £6,000 in 2002. Mind you, this was during a time when you could get 30 year old single malts for $100. The whisky world was nothing like it is today. We see bottles selling regularly these days for hundreds of thousands of dollars and barely bat an eye anymore. In 2002, this was earth-shattering.

We each got a ½ oz pour in a crystal cut Glencairn that featured David Stewart’s signature and the words “Cask 191” on it. These were made in Scotland and flown over specifically for this event. The only person in the room to have tasted Cask 191 before was David Stewart and that was in 2002 when it was being bottled. Needless to say, it was a big moment for all of us. Cask 191 was distilled in 1952 and bottled in 2002 making it 50 years old. There were only 83 bottles made. Rare? Yup. Expensive? Let’s just say that at today’s secondary market prices, this cost significantly more than my car. 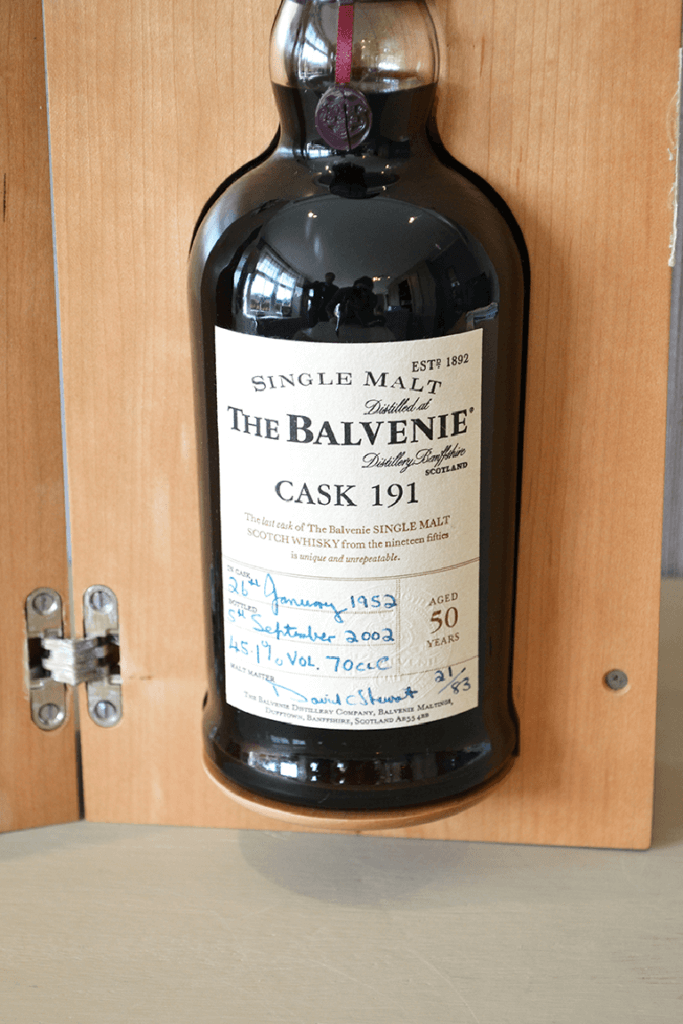 Photo courtesy of The House of Rare Whisky