If it wasn’t painfully obvious from all my social media posts last week, I spent a few days in New York City recently. Despite living quite close to the city, I don’t get the opportunity to spend much time there these days. That means that when I DO get to NYC, I try to make the most of my time there. I had three nights to myself so my plan was to visit three “hotspot” whisk(e)y bars. As it turns out, I went to four. There were a few places I didn’t get a chance to spend time at this time around but they’ll be at the top of my list for my next visit. Here’s how my week went. 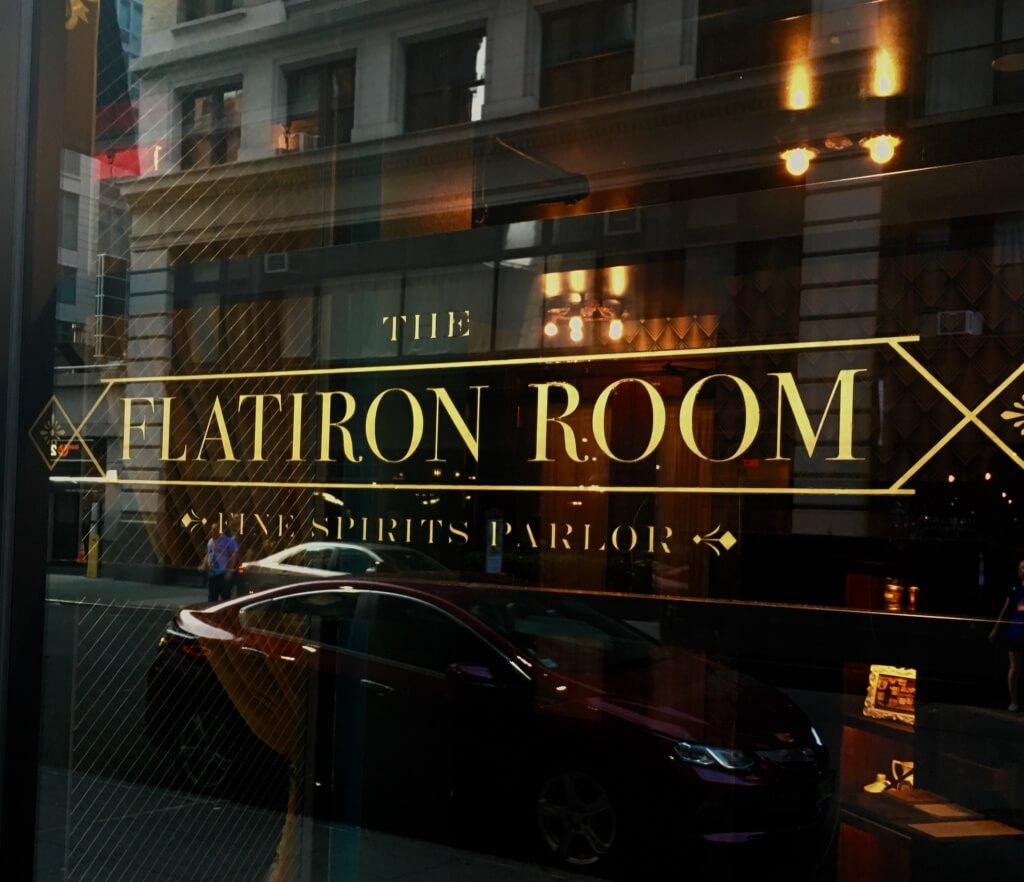 (Please keep in mind that these opinions are solely my own and are based on my own unique preferences in whisky bars. I didn’t tell anyone I was working on a writeup or review as I didn’t want any treatment that was out of the ordinary.)

I got to NYC Monday evening and after getting settled, there was only one stop on my mind. The Flatiron Room is the only place on my list that I had visited before. I met up with a Glenlivet Brand Ambassador there shortly after the establishment opened and we were in a closed-off, private room so I never felt like I got the true experience the fist time around. I walked in and sat fairly close to center stage at the bar. The bartender, named Dave (I think) asked a few questions about what I was looking for before he realized I knew my way around a spirits menu. He was quite friendly the whole evening, talked about his own preferences, and eventually asked if I was a writer or reviewer since I was taking notes and photos on my phone. He was right on the money.

It took me quite some time to settle on my first choice of the evening and even when I did, it turned out they were out of the bottle I requested. I solely take the blame for that. It happens to me all the time at bars with big selections because I like to look for unusual or overlooked independent bottlings. I chose a 15 year Glen Grant that they didn’t have in stock but they found another independent 16 year Glen Grant for me so we were in business. The same thing happened when I asked for an A.D. Rattray Mortlach. Nowhere to be found. That’s ok, I moved on to bourbon and got a pour of Michter’s 10 Year Single Barrel. I got some steak tips alongside my spirits and while the portions were small for the price, they were fantastic. I rounded out the night helping some fellow patrons at the bar select their next pour (an 11 Year Blackadder Bowmore) before heading out.

The name of the establishment, location, private rooms, and huge selection hinted at “upscale” but the grassroots music and overall atmosphere inside the place was much more relaxed and I, for one, appreciated it very much. As it turns out, The Flatiron Room touts their “not upscaleness” right on their website. A great first stop for sure.

GO HERE IF: You want a huge selection of IBs and OBs in a relaxed environment with small plates and live music.

I have heard about the wonders of The Brandy Library for a very long time. An upscale whisky bar with another huge selection of whiskies, brandies, tequila, and everything in between. Walking into the place was a stark contrast from my time at The Flatiron Room. 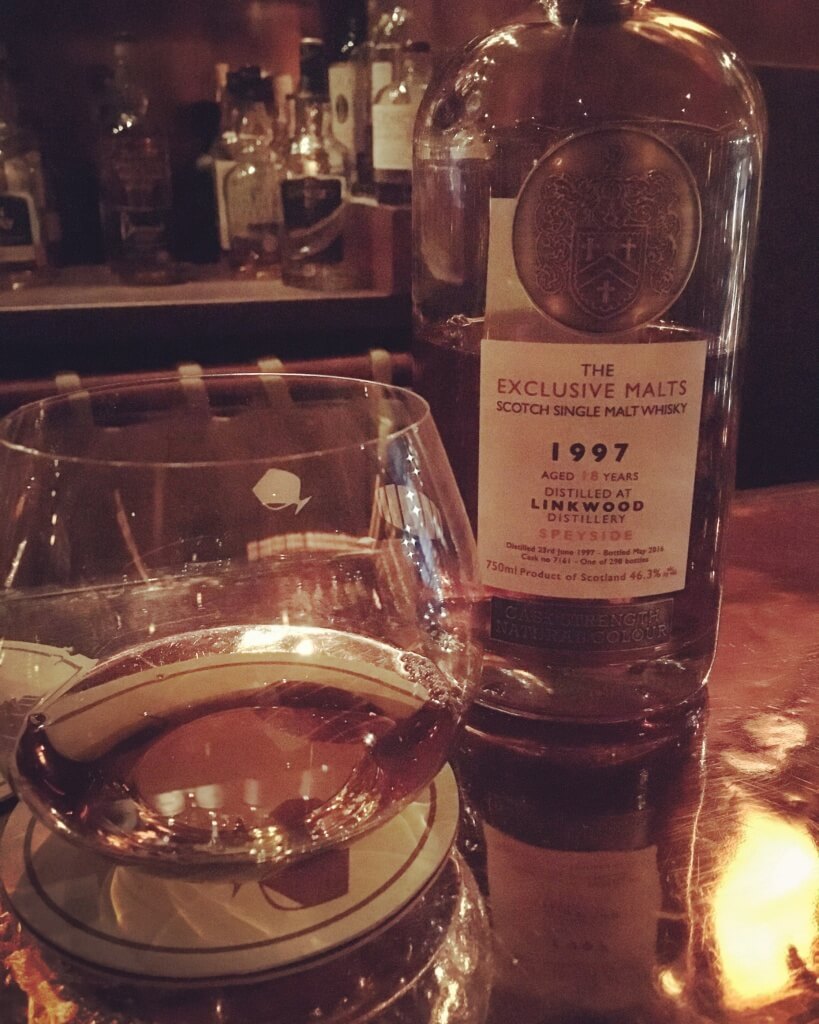 The place was dimly lit and the music playing was softer and classier. The bar staff consisted of two gentlemen that weren’t particularly chatty or attentive to me despite my attempts at conversation. It took me a very long time to select my first pour because I couldn’t find something I thought was a decent value. I eventually settled on a Exclusive Casks Linkwood sherrybomb that was right up my alley but man, oh, man was it a tough find. I got a lamb appetizer to pick on while I was there that was quite decent. I took my time with the Linkwood and observed my surroundings. To my right were two young businessmen who sat down at the bar and immediately ordered two Yamazaki 12s. To my left were two more gentlemen ordering the bar’s Japanese Whisky tasting flight.

It was at this exact moment that I realized I was in the wrong bar for me. The Brandy Library is comprised of 50% trendy, 25% overpriced pours, and 25% pretentiousness. What a combo! There was a table of gentlemen behind me talking about either the local or regional whisky industry and over the course of 30 minutes, I couldn’t figure out if they really knew what they were talking about. They certainly used all the right buzzwords.

I decided that when at a place with both “Brandy” and “Library” in the name, I should probably get some Cognac. I selected a brand that interested me that I had never tried before and the bartender asked if I had tried their private barrel. He poured me a small taste of it and it was decent. He turned around for a moment and I checked it out on the spirits menu. OF COURSE it was more expensive than what I had selected. Stay classy, guys.

GO HERE IF: You’re looking to impress your date by paying $70 for a $20 pour of whisky or show everyone how trendy you are with your glass of Hakushu 12 Year.

I had no plans to stop at On The Rocks during my limited time in the city but wouldn’t you know it, I literally walked right past it on the walk back to my hotel room from the conference I was attending. I’m talking walked RIGHT past a place (same side of the road and everything) that could have been anywhere in the city. I didn’t even look it up ahead of time but stumbled upon it anyway. With that kind of luck, I had to step inside.

On The Rocks is small and by “small”, I mean it’s a literally a bar with about 12 seats and a tiny bit of standing room. The bartender, named Josh, was a knowledgable and friendly guy. I was initially turned off by the fact that there were no spirits menu (or any menu for that matter) but everything that was available was easily identifiable from where I was sitting. I chose a Lark Single Port Cask that I was always curious about but never wanted to spend the money on for a full bottle. It was a bottle kill and most certainly wasn’t a full pour. Josh marked down the price of the pour by 50% of what was written on the bottle. Worked for me. For a while, I felt like I was the only one in the room until I struck up a fantastic conversation with one of the regulars (as it turns out, everyone who walks in is a regular). We extensively talked both whisky and business and it was honestly one of the best conversations of the week including all the people I talked to at my tech conference. Go figure. Throughout our conversation, Josh opened up bottles on the shelf that were either new or interesting and poured us both samples to try.

The only knock on this place is their lack of independent bottlings but I can’t blame them for that since they were the smallest place I visited by several orders of magnitude. Josh even said that it’s difficult for them to bring in a lot of IBs because of their size.

GO HERE IF: You want a VERY quiet place to unwind with OB bottlings after a long day or if you want to strike up a nice conversation with a stranger. 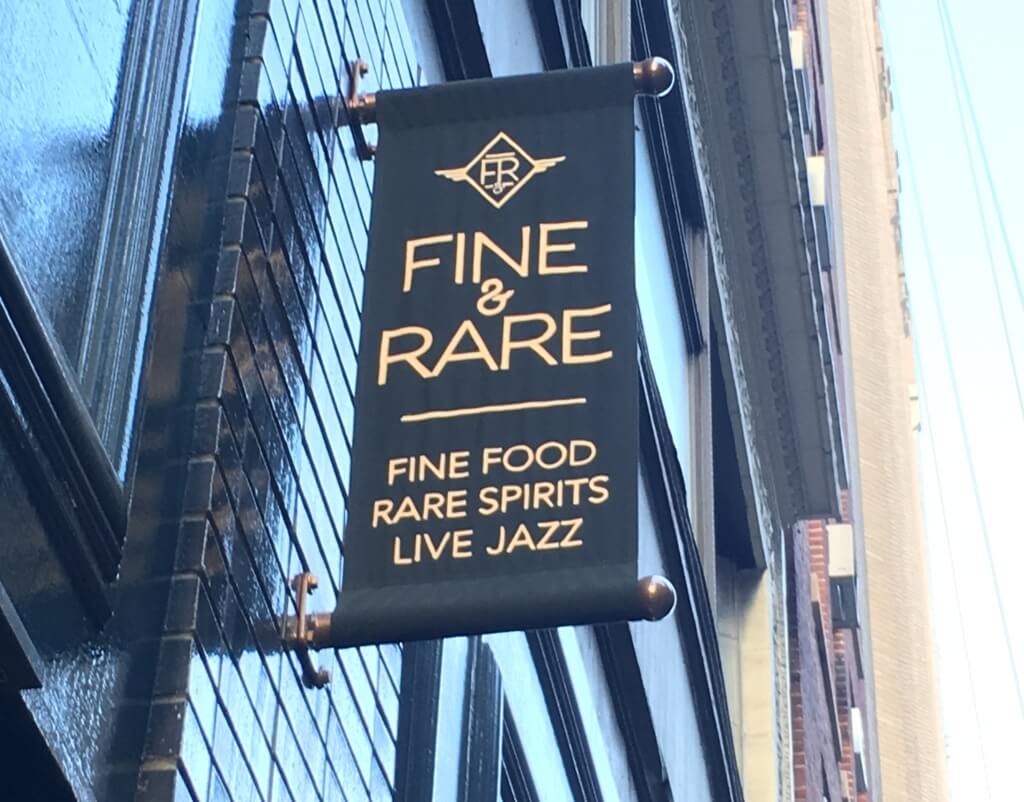 Despite having the same owners, Fine & Rare has a significantly more upscale feel to it. I sat down at the bar and took in the scene. The bar staff is sharply dressed, the live jazz stage was prepped for a performance that started soon after I arrived. The walls of whisky were vast and spread across the entire building. I could tell right away that Devin, the man behind the bar was incredibly knowledgable but he took it to the next level. I ordered a Hazelburn 9 Year Barolo finish and he sent another staff member to find it. When the bottle couldn’t be located, he suggested to his colleague that it might be under “H” for Hazelburn instead of “B” for Barolo. I got the feeling that he knew exactly where every bottle on the menu was supposed to be. As I observed throughout my stay, he was truly dedicated to his craft. Ordering a Hazelburn got us into a discussion about Springbank and I learned that Springbank is the only distillery in Scotland to in-house every single part of the whisky making process from barley to bottle, including making the bottles themselves. I didn’t know that last part. Now I’m REALLY impressed. It’s not often I leave a place like this learning something I don’t already know.

As far as food went, I got a lobster roll that I thought was a decent value for NYC prices and it turned out to be just what the doctor ordered. The live music was on the loud side but I love live jazz and was there by myself so I was perfectly happy with the entertainment. I only stayed for the Hazelburn and dinner but I easily could have sat at the bar listening to Devin talk to the other patrons sitting near me about Mezcal, Tequila, and other spirits that aren’t my forte. I even got a taste of their Herradura private release tequila bottled exclusively for Fine & Rare. My only complaint was a smoke-infused cocktail being prepared several times at the bar having an effect on my ability to nose my whisky. It dissipated after a while, but the smoke was overwhelming at first. A small complaint for an otherwise fantastic evening.

GO HERE IF: You want a big selection of OBs and IBs in a classier location without overwhelming trendiness or if you are looking to have a nerdy conversation about whisky with a staff that really knows their stuff.

There you have it. I won’t do rankings or name a clear favorite here since each place is really designed for a particular type of patron or depending on your preferences, even a particular mood. Hopefully this helps you make a decision on which watering hole to visit the next time you’re in New York!

Guide: Navigating the pricey seas: a...