Glenfiddich “One Day You Will” Summit: Part 2 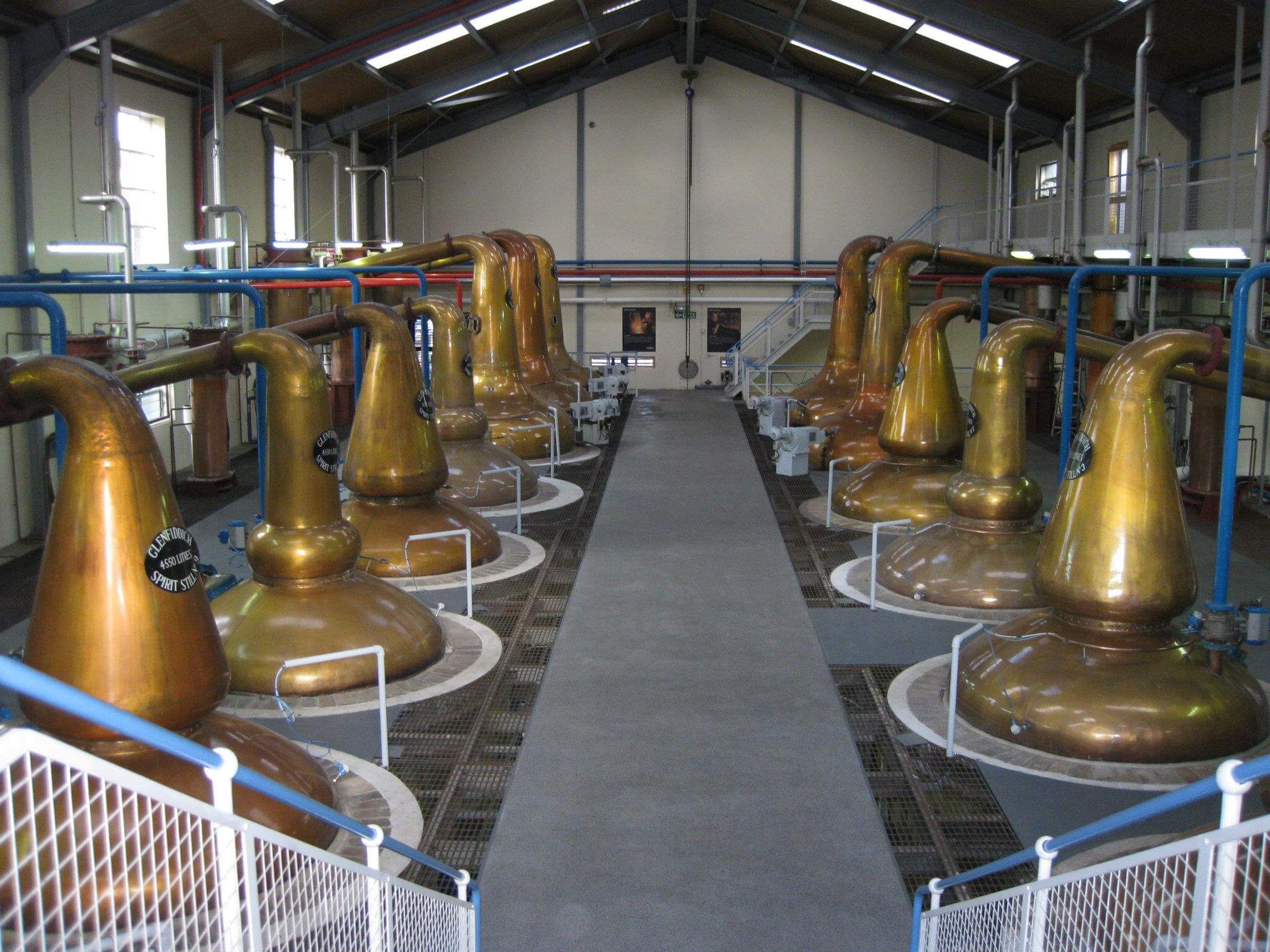 Looking for Part I of the Summit recap? Right this way…

Part 2 of the Glenfiddich “One Day You Will” Summit will go down in history as an all-around amazing day in my life but also as my all time personal record for total volume of whisky consumed in 24 hours. Follow your dreams, kids.

Day 3 started with breakfast with the Glenfiddich team, followed by another morning at the distillery. When we got there, we split up into two groups. Each group would be doing a tour of the Glenfiddich distillery followed by one of two activities. After the first activity was over, the groups switched and did the other one. Group 1 was doing their tour with one of the normal Glenfiddich tour guides and Group 2 was touring with Ian Millar, former distillery manager and current Global Brand Ambassador. I was technically in Group 1, but after chatting with Ian the night before, he told me to make sure I was in his tour group. You got it! No one seemed to notice/care that I joined the wrong group. 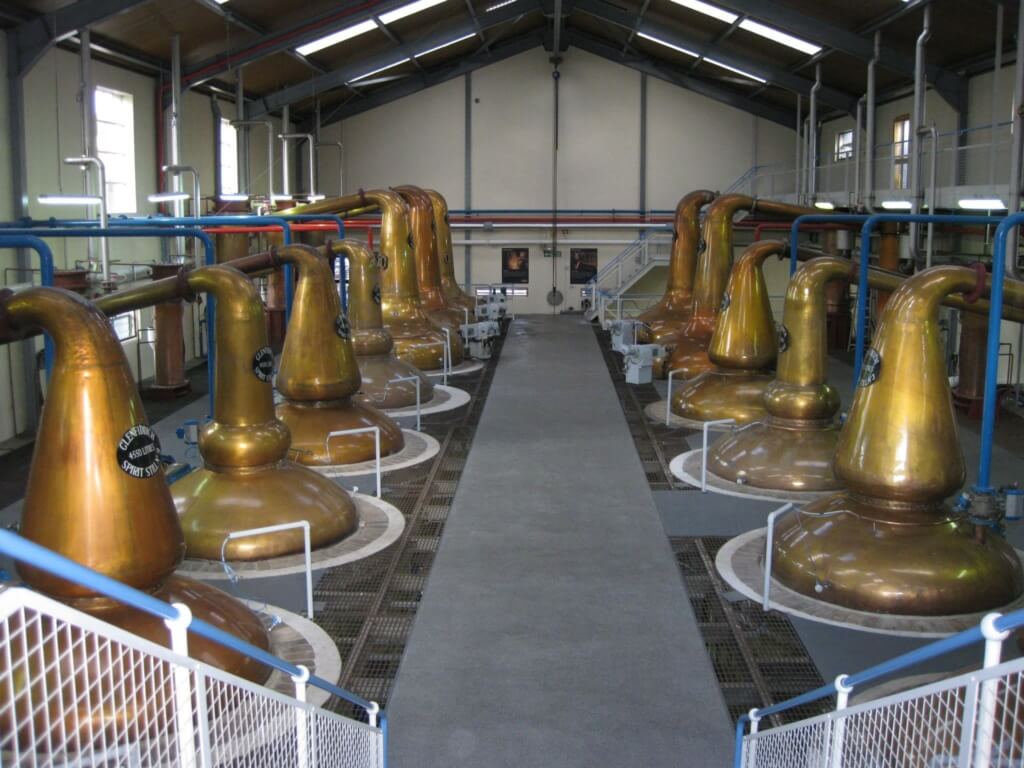 The stills are MUCH shorter at Glenfiddich as compared to Balvenie.

The Glenfiddich tour was very different than The Balvenie. Much more “commercial”, which I can understand since Glenfiddich is the best selling single malt brand in the world. We saw the same things in this tour as you’d find in any distillery tour: mashtuns, washbacks, stills, etc. We went into one of the warehouses a watched a brief video of the coopers and barrel-making process. We then nosed three barrels in rapid succession, a Spanish oak cask, and two American oak casks, with 25 years of age between them. It was easy to tell the difference when nosing them back to back. After our tour, we moved on to activity 1 in the Glenfiddich laboratory.

Senior TED Fellow Rachel Armstrong gave us a brief talk about her “living architecture” project. She is essentially working on a project to save the “streets” of Venice by building structures that can repair themselves after water damage corrodes and eats away at them. (Check out more on her project here) We did a hands on application of her ideas by adding drops of a solution into oil and watching the unique behavior of each droplet. Unlike chemistry class, we didn’t lose points for not cleaning up after the lab period was over. We then switched places with the other group and went into a warehouse basement where Interactive Digital Artist Marek Bereza’s works were set up for us to play with. Among the cool stuff he has done was a projection of a fish tank on the wall. When you walked up to it, your shadow interacted with the tank. For example, if you waved your arm, it would scare away all the fish in that area. Really cool stuff.

When we were done there, we went over to the Glenfiddich gift shop to wait for the other group so that we could have lunch. While in the shop, I asked Ian Millar to describe the 14 Year Rich Oak to me since we can’t get it in America. He said he’d do me one better and told me to follow him. He told some of the other guys waiting at the door that we were doing an impromptu tasting of the Rich Oak if anyone else wanted to join up. We went to the room where we were having lunch and tried it. He said that they’re afraid to launch a 14 year old Glenfiddich in America because the 15 year is doing VERY well stateside and they don’t want to cannibalize their own sales of it.

While everyone else sat down and talked amongst themselves, one of the speakers for the afternoon (mixologist Eben Klemm) and I were talking some more with Ian and Eben asked him a question about chill filtration. He started to answer us and then said, “You know what? I have a better idea.” and told us to follow him. We walked over to another building close by and he said that we had to leave cameras at the entrance. We went into a big room with a whole lot of machines and he showed us the big chill filtration unit, which was pretty cool (no pun intended). He told us that Glenfiddich does chill filtering the right way by bringing the spirit down to a relatively higher “chilled” temperature compared to other distilleries. He says it accomplishes the goal without sacrificing flavor. I thought we were going to head back to lunch when he took us over to a door at the corner of the warehouse.

We walked into a small room with some metal storage units. It almost looked like an exam room at the doctor’s office. He unlocked the corner cabinet and said to us, “This is my private whisky collection” and told us to grab a glass each. We sampled 4 things from his collection in pretty rapid succession. The first was Snow Phoenix and when Snow Phoenix is leading you off, you know you’re in for a treat. Second was a Glenfiddich 20-something year old that I honestly don’t remember because it was all happening so fast and because of what I had next. Next up was a bottling from the Glenfiddich Rare Collection. It entered the cask in 1973 and was bottled in 2010, making it 37 years old (Check it out here). And finally, we tried the Glenfiddich 40 year. Now, as you all probably know, the age statement on a bottle is the minimum age of the spirits inside. Glenfiddich 40 uses a solera vat similar to the 15 year expression. He told us that this bottle had whisky in it that entered the casks in the 1960s, the 1940s, one from 1937, and one from NINTEEN TWENTY FIVE. It was so unique that I couldn’t even begin to figure out what I was nosing and tasting. It was a very “dark” tasting whisky with lots of dried fruits, heavy oak and spice influence. We finished up, graciously thanked him, and walked back to the room where everyone else was and joined them for lunch.

During lunch, William Grant Chairman Peter Gordon came over and sat down at our table. He’s a really down-to-earth guy for someone who has taken over the family’s global enterprise. With Peter, I could never find that sense of entitlement that one might expect from someone in his position. At one point during lunch, I noticed that he was pouring other people their coffee for them. A class act all around. 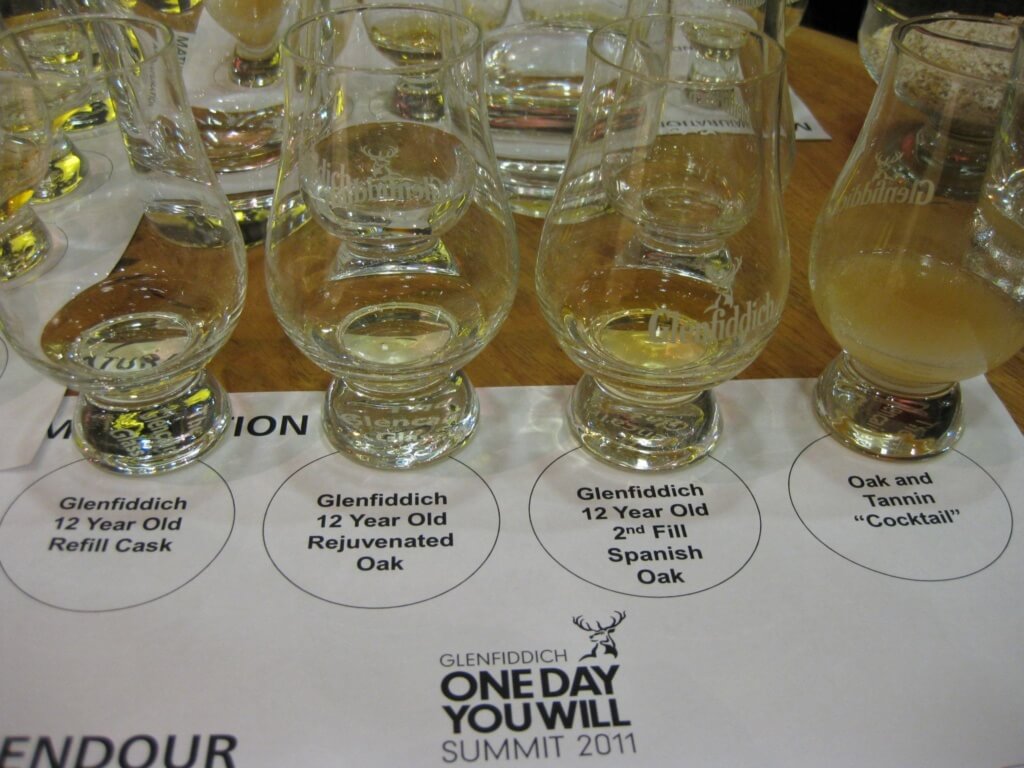 After lunch, we did a very special whisky tasting. I know, another tasting :). This tasting/masterclass was unlike anything I’ve ever seen before. It was put on by Glenfiddich Maltmaster Brain Kinsman and Eben Klemm, a molecular biologist turned mixologist. They did some really cool stuff for this session by separating flavors so that we could truly understand what goes into a finished whisky product. To start, he took Glenfiddich 12 and 18 and used what I can only refer to as “science magic” to remove the color and woodiness from each one. We also tasted the oak “residue” that remained. He really wanted us to be able to know what oak really tasted like when we describe something as “oaky”. We also tried 12 and 18 year single barrel samples from American oak and European sherry oak casks, which are the two main types used in any Glenfiddich bottling. As we learned, the percentage they use is about 85% American oak to 15% sherry. So after tasting each individual flavor, we added a bit of the Sherry spirit to the American oak and recreated what the final product is like. We also tried whiskies from 2nd fill casks, rejuvenated casks, etc. to try and pick out those differences. We basically decomposed Glenfiddich to its core components and then put it back together again. Completely unique. We also tried the raw new make spirit, 70%+ alcohol by volume, clear, and unaged. REALLY strong and fruity. Of all the stuff we tried that day, the 18 year old American oak barrel was my favorite and when the group was asked the same question, I found that it was pretty popular with everyone. This proved to be important, as I’d soon find out.

After our masterclass, we went back to the hotel to change into formalwear for our gala dinner. When we arrived back at the distillery, Eben Klemm was finishing up a creation that went completely against the grain of normal cocktail physics. He created a drink made with Glenfiddich new make, 12, 15, 18 year old whiskies, candied pineapple, Scottish tea, and another ingredient or two that escapes me now. He froze the new make distillate in the glass with liquid nitrogen before adding the other ingredients, so that as you held on to the drink longer and longer and the “ice” melted, the cocktail actually got STRONGER, not more diluted. A bagpiper started playing and led us downstairs where a really long banquet table was set up for us. Again, we had assigned seating, which turned out to be a great idea, since it forced us to get to know people that we might not have talked to otherwise. Caroline Hobkinson designed our meal again so I knew we were in for an interesting evening. Before we ate though, we were treated to an amazing rendition of “An Address to a Haggis” performed by one of the longtime William Grant employees. It was truly an authentic experience. 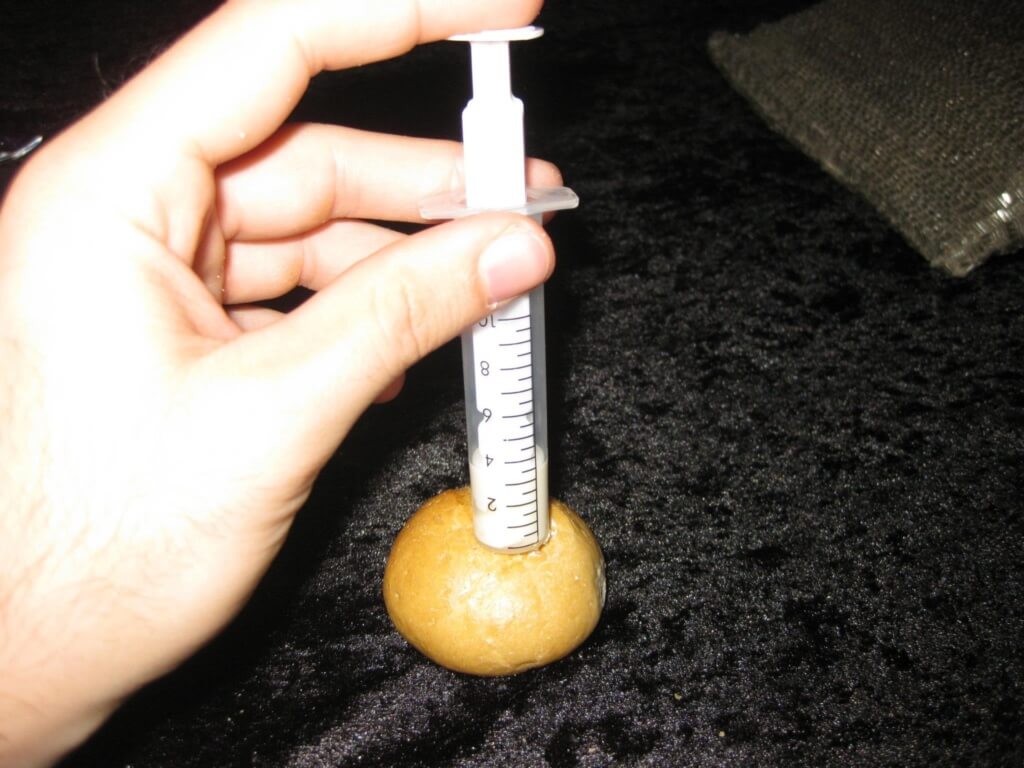 Injecting my roll with a syringe of cream cheese, just like at all the gala dinners I attend.

To start the meal, each setting had a Petri dish and syringe filled with something. We were told to start by looking up to find our dinner rolls, which were tied to balloons up on the ceiling. We were then instructed to inject the rolls with the cream cheese-filled syringes. Awesome! We spent the next part of our meal blindfolded. We were instructed to hold out our hands and when something was placed in it, to eat it immediately. When I put the items in my mouth, someone was standing behind me with a garnish that was placed in front of my nose. For example, one of the garnishes was a rosemary branch and when I smelled it, the taste of what I was eating was immediately enhanced. Awesome! Our fish and rice dish was served in a sardine can and to eat it, we got more sharpened sticks. This time, each one already had a potato attached to it. Remember, no plates or napkins. It was interesting to say the least! Oh, and the haggis was actually really good. After dessert, we tried the Glenfiddich 1963 Reserve, Brian Kinsman’s recreation in nose and taste of the original “single malt that started it all”. Awesome.

In keeping with tradition that week, we then went back to the hotel bar. By this point, I had become pretty good friends with some of the Glenfiddich staff. At one point, one of them asked me, “So, what from our lineup HAVEN’T you tried.” I answered truthfully and said “just the older expressions.” They told me to finish up what I was drinking and then bought me drams of Glenfiddich 21 year and Glenfiddich 30. By this point in the week, I could barely process the awesomeness that was flying at me from every direction. One of my finest moments of the trip included an inebriated in-depth scientific conversation with TED fellow/genius Rachel Armstrong. I’m sure I sounded equally as brilliant.

Click here for Part III of the Summit recap.