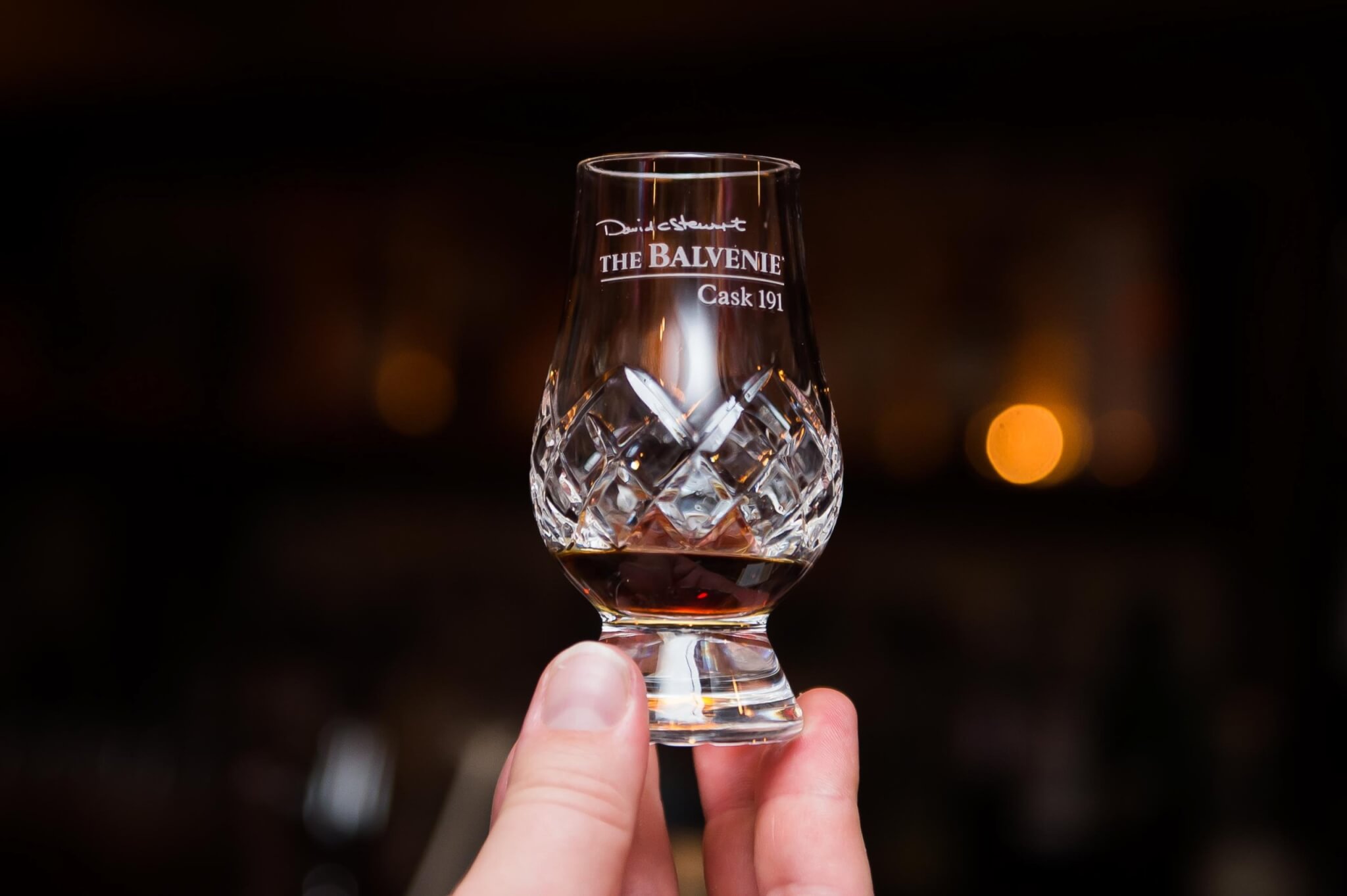 I consider myself incredibly lucky to have been a part of an amazing Balvenie tasting event at the world-renowned whiskey bar Jack Rose Dining Saloon in Washington, DC.

This was no ordinary tasting, mind you. Two things in particular set this event apart from your run of the mill whisky tasting. First, the Balvenie team was out in full force at this event including brand reps from the United States and Canada, Global Brand Ambassador Sam Simmons, and long-time Balvenie Malt Master David Stewart, MBE. Also in attendance were whisky writers and social media personalities like myself. The man responsible for this tasting is Instagram’s (in)famous @thescotchfather who supplied the Cask 191 bottle for this tasting. Balvenie’s US East Coast brand ambassador Gemma Patterson handled the logistics from the William Grant side of things. I owe both of them a debt of gratitude for putting on an unforgettable evening. 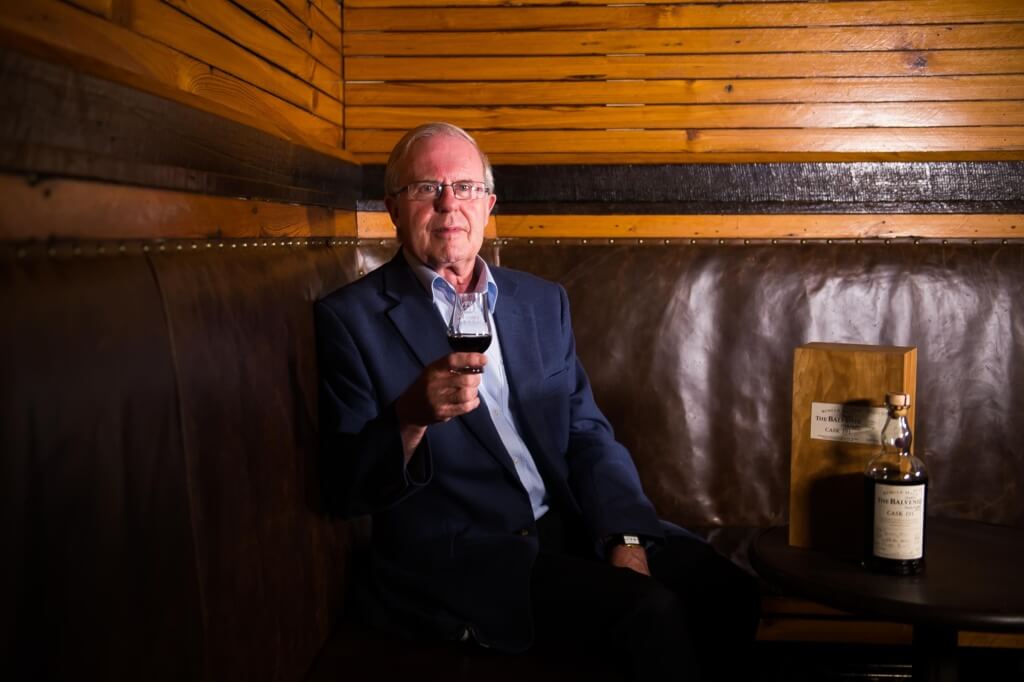 What could possibly bring that kind of team across the globe to Washington? Balvenie’s Cask 191, a literal piece of history. Cask 191 is a single hogshead that was filled in 1952 and aged for 50 full years before being bottled in 2002. 83 bottles were made. Assuming a 225-liter capacity for a standard hogshead, that means that the angel’s share took 75% of the cask during the half century it matured, leaving less than 60 liters at bottling time. To call this rare is an understatement.

I arrived at Jack Rose Saloon a bit early and was brought downstairs into a private tasting room. It was small but full of charm, dimly lit, and absolutely perfect for this type of event. As I walked in, David Stewart was in the middle of the first of three consecutive interviews. I’m sure that’s a common occurrence for him when he travels to events like these. In the mean time, I got to meet some of my fellow whisky brethren from across the Internet, finally putting faces to names I’ve interacted with on a regular basis. I even got a few short minutes one on one with David Stewart. He answered all sorts of questions I’ve always wondered about during our brief chat.

Each setting was filled with some typical Balvenie swag: some promotional materials, a water dropper, branded pens, and a whisky thief. The bar was in full swing right away serving a wonderful cocktail made up of Balvenie 12 Year Doublewood, cacao-infused Campari, and a honey cinnamon syrup. The bar was lined with a bunch of bottles from @thescotchfather’s collection including another 50-year-old Balvenie from 1987, the Chapter 1 DCS compendium bottles, and Vintage Cask 1966 among other gems. This is clearly no measly collection. 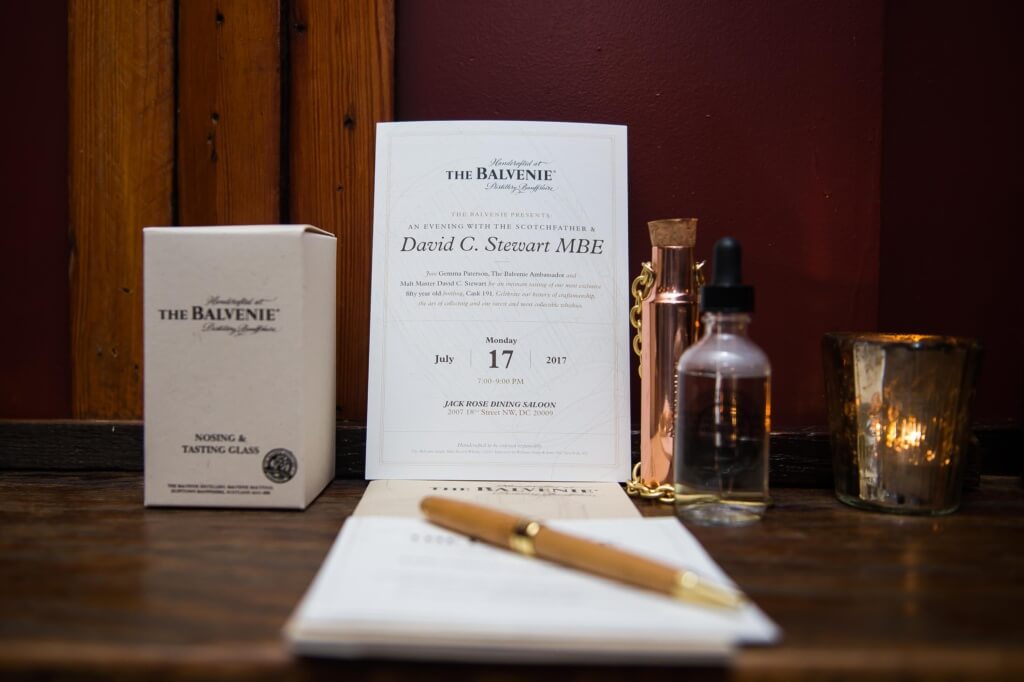 Various small food pairings were passed out throughout the evening and were well-timed during each tasting. The actual tasting itself moved at a much quicker pace than I’m comfortable with but I made due. I was just happy to be in attendance at all. We started off with the 21 Portwood, a favorite of mine and as I learned, a personal favorite of David Stewart as well. I know this whisky very well and considering that we started with Portwood, things were only going to go up from there.

The next whisky in the tasting was Single Barrel 25 Year. Aged at least 25 years in a single refill bourbon cask, the 25 Year is bright and vibrant considering its age. I’ve had a few SB 25 casks before and this one was as great as ever though I never got a chance to write the number down before the evening ended.

Next up was Tun 1509 Batch #1. I have a sample of Batch 1 lying around somewhere in my bunker and never got the opportunity to try it until now. It was a great example of the distillery’s house style and had I not been a Tun 1401 aficionado, I probably would have thought that this was some of the best stuff The Balvenie has to offer. 1401 aside, I’d probably put Batch 1 of 1509 it on par with the SB 25 year. 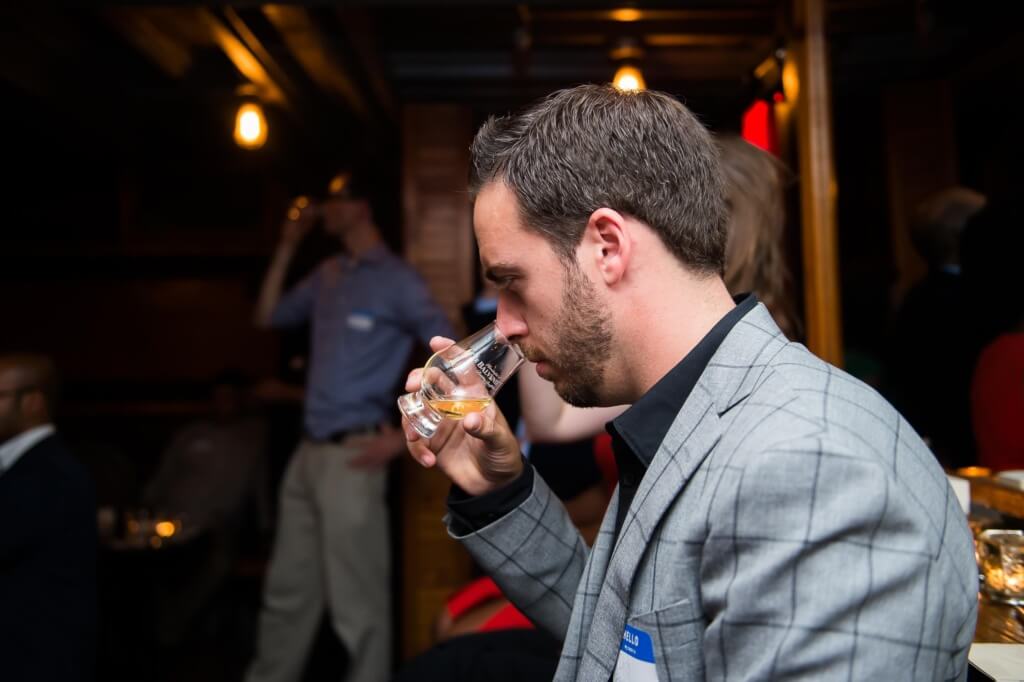 The next offering was the biggest surprise of the evening for me: Balvenie Peat Week 14 Year. This is a new release that should be hitting shelves in the United States in September. Before we go any further, here’s my disclaimer right up front: I typically don’t like peat. Peat Week refers to the last week of the malting season right before everything gets a final cleaning where The Balvenie peats a bunch of their own malt for experiments like this one (I believe Glenfiddich does something similar as well.) According to David Stewart, this is peated at 5 ppm. My initial impression was somewhere closer to 15-20 so this certainly surprised me. 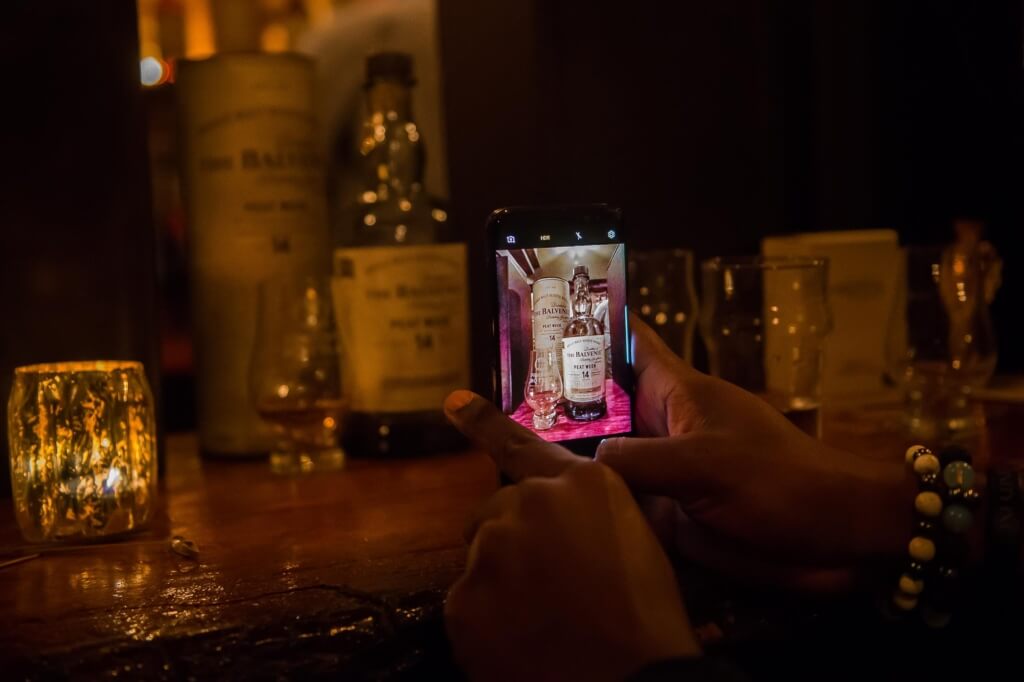 The peat is “heaviest” on the nose and unlike Islay peat, this isn’t iodine-y nor is it bandaid-y in the least. The other notes are typical of teenage Balvenie, orange peel, honey, some oak, a hint of fresh mint leaves, some spice and vanilla. All in all, a solid offering at 48.3% abv. Nice. To the peat heads out there, know that this is not overwhelming in any way and given the flavor profile of The Balvenie, it had to be light or it would have overpowered the whole thing. This is a well-balanced malt that should be a crowd pleaser this fall. I was a bit concerned about drinking a peated expression before Cask 191 so I purposely didn’t finish this one. Even at a low ppm, peat does a number on your palate if you go back to a non-peated expression next. I had some water and more food before moving on.

Finally, we made it to Cask 191. I saw it being poured at the bar and it looked like they were very carefully measuring out half ounce pours. That’s all I need to get a full review done. When they starting bringing out the glasses for this part of the tasting, it was immediately obvious that this wasn’t any normal glass. This was a crystal cut Glencairn that featured David Stewart’s signature and the words “Cask 191” on it. These were made in Scotland and flown over specifically for this event. I was very happy to learn that we were taking our glass home with us afterward. David Stewart was involved in the selection and bottling of this cask back in 2002 and had not tried it again until this tasting. He waited a full 15 years for this. Sam Simmons had never tried this either and I know he has been a long-time employee of the company. It’s easy to see why so many people from the team made it out for this event. 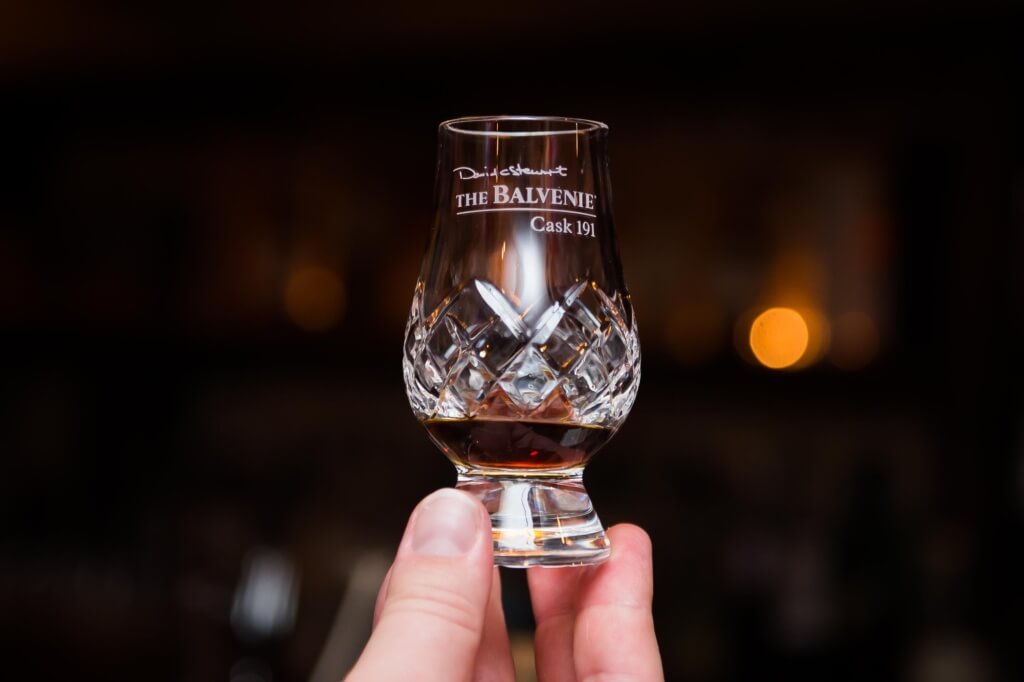 This 50-year-old whisky is a super deep hue of red and my first impression on the nose was of pure PX Sherry. I just happened to have some great 20 year PX a few weeks before and the similarities on the nose were uncanny. David Stewart couldn’t say with 100% certainty whether Cask 191 previously held bourbon or sherry but I’m convinced that it was sherry based on what I tried. The first sip of this only confirmed that theory with more sherry influence and alllllll the dried fruits you could think of. I have a full review of this amazing whisky coming soon but I can’t possibly score this on any scale that makes sense given the rarity, age, and price of this bottle. It’s certainly not a daily drinker due to the pure decadence but it’s perfect for a special occasion.

My full review of cask 191 is available here.

And just like that, it was time to wrap up the formal part of the evening. A bunch of people stuck around for a while afterward including David Stewart and I got a chance to talk to him for quite a while. I showed him a video of my at-home Balvenie collection and he was quite impressed. I also learned during my conversation that my blind tasting of the entire Tun 1401 range is something not even he has tried before. I think my brother and I are the only ones in the world who have done it before. Very cool. After a few photos and good byes, I started the walk back to the Metro station knowing that I was a part of an event that will likely never happen again.

Another big thanks to Jay (@thescotchfather) and the Balvenie team for getting the right pieces and people in place for this. I won’t forget this evening for a long, long time!

All photos courtesy of The Balvenie.